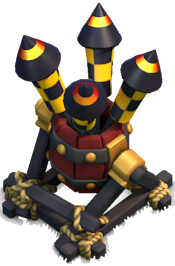 The air defense is a critical defensive building, it has a high damage per seconds and attack air based units like the balloon or dragon.

The air defense targets one troop at a time and deals hits damage, it cannot attack ground units. When you reach  town hall 4 you can build the first one. It is wise to build and upgrade them quick. Because it is the only real way to defend against dragons.

Appearance of the air defense

Defending with the air defense

Fun facts about the air defense

In this video you see a player attack a village with the giant-healer strategy. The air defense is taken out first and them the giants and healers are deployed. Later the village is raided by barbarians.