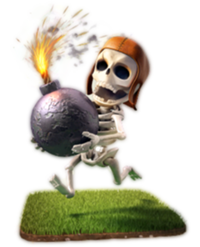 The Wall breaker is an essential troop in attacking other villages. Walls often have high hit level points, your attacking troops are often held up with breaking through what makes them vulnerable for enemy defenses. The wall Breakers favorite target are walls, they deal 40 times the damage against walls. Thats the most damage a troop can do against walls, that makes them very succesfull in breaking down walls.

They deal splash damage, so villages with multi layer walls are no sport for the wallbreaker. They will go after the nearest wall and if an outer layer is destroyed they aim for the inner layers. Once a wall breaker detonates he is gone. Like a suicide bomber they have only 1 goal.

Appearance of the Wall Breaker

Fun Facts about the wall breaker

How many wallbreakers do you need?

2014-05-21
stephaneggy
Previous: Giant
Next: The Wall Breaker: Everything you want to know