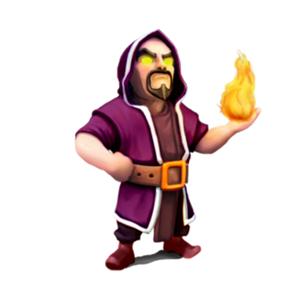 The wizard is like the archer, they both do damage from a distance and can attack over walls. The wizard shoots balls of fire that do high damage, especially when upgraded.

The wizard does not have much health, so it is easy destroyed. Most players use Giants as meat shield to protect the wizards.

Due to their low damage they are vulnerable to point defenses. They can attack a few splash damage waves.

They are the most effective when placed in groups. But some people use them in smaller numbers against low level players.

Appearance of the Wizard

Fun Facts about the Wizard

In this video the wizard and healer strategy is explained. It is very effective to raid villages.