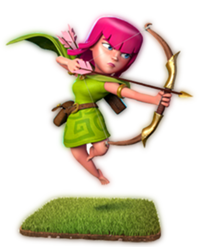 The archer is ideal for taking out targets on a long range, such as behind walls.

They are often combined with barbarians and can attack buildings behind walls. Due to this advantage this is a higly popular troop that is used by players in all leagues. They can shoot over Walls, but thay can get killed easy. So make sure that your Archers are protected!

They attack random so be sure to place them strategically, you don’t want them to become mortar or wizard tower bait.

Appearance of the Archer

Fun Facts about the Archer

Research and training cost of the archer