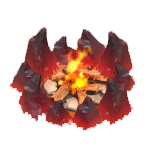 If your army camp is destroyed your troops will survive. Every troop you train takes in a amount of army camp space. A barbarian takes 1 space and a giant 5. But this can go up to 20 spaces for a dragon or even 25 for a pekka.

The more you upgrade your army camp, the more troops you can train. You can have a maximum of 4 army camps and they can hold a maximum of 240 troops.

The Heroes don’t take any space in the army camps. It is not recommend to place walls around the army camps, it is better to use the walls to protect your defenses.

Every upgrade of the army camp increases it with 5 troops. In the beginning it is wise to upgrade your camps fast because you can attack with more troops. Later in the game they become very expensive.

Appearance of the army camp

Fun Facts About The ARmy Camp