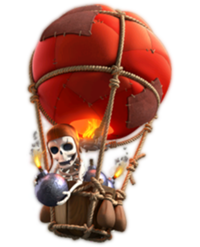 Balloons are slow moving air objects that drops bombs on buildings. They are “promoted” wall breakers that attack from an hot air balloon. They don’t die after attack like the wallbreakers. The bombs deal slash damage on the ground units.

The balloon is taken down very easily by air defenses so make sure to take them out before deploying them. The balloon targets defensive buildings first. When a balloon is destroyed, it explodes and deals some additional damage.

Appearance of the Balloon

Fun Facts about the Balloons

2014-05-21
stephaneggy
Previous: The Wall Breaker: Everything you want to know
Next: Wizard