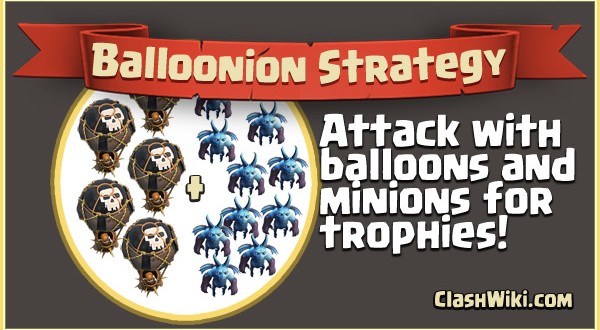 What do you need

The Balloonion strategy is a widely used strategy with high level players that are trophy hunting. Balloonion stands for: Balloons and Minions. It is possible to get high loot towards the masters league so some players use it for farming too. If used in Masters you can expect 50%+ destroyed and 350k+ loot. We tried it in lower leagues too with TH8 troops. Most bases are 3 starred and you can get 500k+ loot easily, it’s fun to do and good to practice for the future.

Altough Balloonion is mostly used with TH9 and TH10 you can use it at TH8 too, just use less minions.

The training time is 40 minutes and you can have 1 spell ready each raid. You can also use 4 healing spells, what works best for you.

The training time is 40 minutes and you can have 1 spell ready each raid. Here you can also use heal spells if needed.

The training time is 40 minutes and you can have 1 spell ready each raid. Instead of lightning you can use a heal spell. Balloons are not very strong in TH8 so try to upgrade them.

Don’t go for the core, the key is to destroy a wizard tower and go for the mines. You will be attacking buildings outside the walls or on the outside of the village. Heroes and spells are needed, they give your troops that extra power and the heroes can destroy the much needed buildings for 50%. Be patient, this strategy requires your full attention. Skip until you find the right base and attack wise and slowly. This strategy is not for deploying all your troops at once. And take note that you can’t always win, you loose every now in a while.

Search for bases with a minimum of 300k gold or 2500 DE. It costs a lot of elixir so make sure you get something back with your trophies. Some people use this strategy for farming DE, it takes a while to build but the return is high. Weak bases with loot are always a good target. Look for bases with lot’s of buildings on the edge, large bases are good you can destroy it for 50% without having to go to the core. Upgrading air defense or air targeting defenses are also good, if they are upgrading you have to deal with one less. An uneven spread of air attacking defenses is also a good sign, the balloons can get them fast after each other. One balloon kills 1 unguarded archer tower, search for unguarded archer towers and balloon them to death. Look for gold storages in the middle, that is a sign of easy to destroy air defenses because they must be more to the outside.

You can destroy one archer tower that is unguarded with 1 balloon. It’s a good deal.

Clan castle troops are your enemy, lure them out with a barbarian and kill them with a lightning spell. A balloon works too, lure them to the edge and deploy a balloon. The splash damage when it is killed will destroy the cc troops.

Balloonion at th8 requires a different strategy. You are looking for easy bases with lot’s of loot. Drop 2 waves of all balloons, the draw a horizontal line of minions to destroy the rest. The balloons go for the defenses and act as shield. The minions destroy the rest of the buildings and will follow.

2014-09-01
stephaneggy
Previous: Use Game Center or Google+ to save your village
Next: 200 Archers Attack