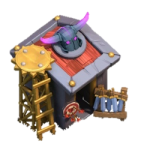 You can train troops in the barracks. With these troops you can attack other players or play the single player missions. It cost elixir to train troops. How much is depending on the troop. If you upgrade a barrack you cannot use it until it is finished.

You can speed up the training using gems, the troops are instant ready. You can also boost the production of troops for 10 gems. This speeds the production up with 4x. This lasts 2 hours.

If you cancel the training of troops you get a 100% refund for the elixir used. You can queue more troops then your army camps can house this has 2 advantages:

1. You can queue the troops and then attack. All the housing space of troops used in the attacks comes free and the barracks are building new troops while you are attacking. This speeds up the attacking process.

2. You can store elixir in the queue list. You can queue up to 589.200 worth of elixir if you use maxed out dragons, wall breakers and archers. You can un-queue  the troops to reclaim the elixir.

If a barrack is destroyed, the queue of troops will remain and they will continue to train troops.

Appearance of the barracks

Fun facts about the barracks