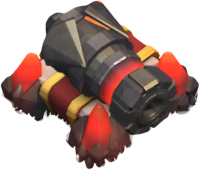 The cannon is the first building that a player of clash of clans build at the starting tutorial.

They are cheap and effective at low levels and in the beginning of the game. They attack only ground units.

The cannon is great as point defense against single units. They are strong against weak units like wall breakers, most of the time they are killed with 1 shot.

Appearance of the cannon

Defensive strategy with the cannon

Offensive strategy against the cannon