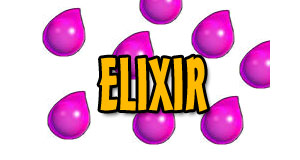 Elixir is a resource that is used in game, with elixir you can:

Elixir is collected by a elixir collector, when you collect it, it is stored in your elixir storage. You can see how much elixir you have in the upper right corner of the game screen.

You can also collect elixir by attacking other villages. When you progress further in the game (after th level 8) elixir is much less needed than gold.