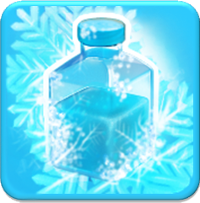 The hidden tesla is only affected by this spell once it is revealed. It is wise to use this spell on a splash damage defense like the wizard tower or mortar if you have a large group of barbarians or goblins near it.

Also an effective strategy with the freeze spell is to disable the air defenses and deploy a few balloons to take it out.

If your high health troops are destroyed and there are low health troops left (like the barbarians and archers) it is wise to freeze the splash defenses near them, this can be a game saver in a lot of matches.