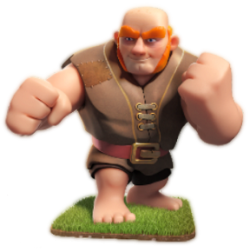 The Giant is the one of the backbone troops . They can absorb very much damage but don’t give much damage themselfs. In groops they are very strong though!

Giants are large troops capable of taking much damage. But they don’t give much damage if you compare it with the housing space they take. The primary target are the defenses. If you use them with a few together you can strategically take out enemy defenses. They can also be uses as a distraction for other troops. That way you can deploy the more offensive but weaker troops without taking the risk of them being destroyed too fast.