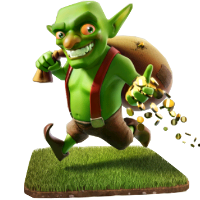 The goblin is a green creature that haves 1 goal: Loot! They are the troop to go if you want to raid that precious gold or elixir.

The Golbin is ideal in looting strategies, it does double the damage to resource buildings (Gold mines, elixir storages, gold storage, elixir collector). Because of that it delas 2x the damage to those buildings than barbarians and 3x more than archers. Their health is between an archer and barbarian.

It is also the fastests ground unit and they attack resources first. It is wise to deploy some other troops as meat shield first. Like the Giant that can take muche more damage and can distract the splash damage defences.

Appearance of the Goblin

Fun Facts about the Goblin