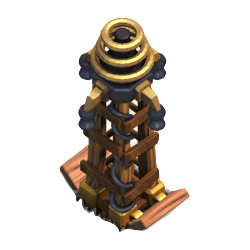 The hidden tesla is a defending building. It works other then normal defensing buildings. It is hidden underground, when a troop comes in it’s range (6 tiles trigger) it shoots out of the ground and starts attacking the units. This makes it a surprise defense. It can hit targets at max 7 tiles.

When a village is destroyed more then 51% the remaining hidden tesla’s will pop out and must be destroyed for 3 stars.

It does double the damage against pekkas and they are its favorite target. It can attack ground and air units and does hit damage.

Appearance of the hidden tesla

Defending strategy with the hidden tesla

Fun facts about the hidden tesla

This video explains the hidden tesla and how to use it.