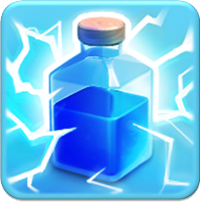 The lightning spell is the first spell that you can build if you have a spell factory. This spell drops lightning bolts to the place where you deploy it. It splash damages the space around the hit area with 3.5 tiles. The most damage is done to the center of the lightning spell.

The spells cost relative much elixir (15.000 to 24.000) but can help a player out if needed. It takes 30 minutes for the lightning spell to produce.