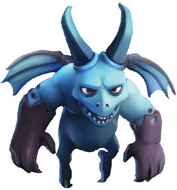 The minion is the first troop unlocked in the dark barracks. It is fast and cheap and a weak flying troop.

You need dark elixir to train the minion, it’s attack is the spitting of dark elixir. It cannot be attacked by mortars and cannons because it is a flying unit. It can be hit with air defense and air bombs, they are destroyed very easily!

Seeking air mines do not attack the minion, but watch out for air bombs because they still can attack it!

Appearance of the minion

Offensive Strategy With The Minion

Defensive Strategy with the Minion

Fun Facts about the minion

Balloon and minion attack video. This video explains the best attack with minions combined with balloons.