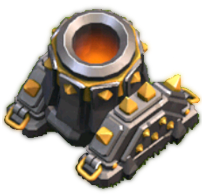 The mortar is one of the most valuable defense. It shoots explosive bombs at any troops that come into it’s range. They deal high splash damage and are very effective against groups of low health troops like the archer, barbarian or goblin. The mortar can only attack ground troops.

They shoot a bomb every 5 seconds and have a high range of fire. The mortar has an blind spot of 4 tiles, if a enemy is in these tiles the mortar can’t attack. This makes it weak for close enemies.

The shells take 1 second to land on the opponent, fast troops like the goblin can dodge them easy if they move between the mortar strikes.

Appearance of the mortar

Defending  Strategy with the mortar

Fun facts about the mortar

Int his video the mortars are destroyed by giants using healers.