Traps are very important in clash of clans. They allow you to strategically arrange your village to maximize your defense. Traps are relative inexpensive.

You can upgrade traps with builders. Once a trap is build you can not sell it.

If a trap is under upgrade it will still work.

When a trap is set you need to re-arm it. This cost gold. The more the traps are upgraded the more gold it cost. If you do not re-arm a troop it will not work. You can re-arm all traps with a single button. 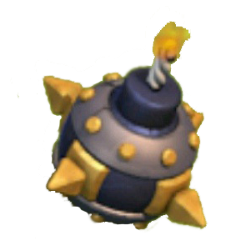 The bomb explodes when a unit walks over it.

The bomb does splash damage. This means you can hurt a group. A single bomb does no great damage against individual troops.

Multiple bombs in a cluster will do great damage.

If a enemy troop walks over the spring trap it is trowed out of the field, resulting instant death.

It can bounce of a total of 15 housing troops of units. So it can bounce 3 giants at once or 15 barbarians. A P.E.K.K.A, Golem or a hero doesn’t get affected by the spring trap. A goblin is too fast and also isn’t affected.

Spring traps are often placed in gaps between walls, troops will walk into these gaps and then are sent away. You cannot upgrade a spring trap. 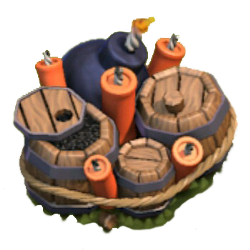 Just like the normal bomb, the giant bomb will explode when an enemy comes close. However it is far more powerful and can take out large groups of low health troops like the barbarian and archers. 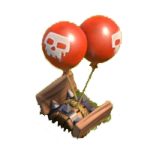 The air bombs triggers when an flying unit is coming close to it. It has a high blast radius.

The air bombs work extremely well against minions, large groups of them are easy destroyed with a single air bomb.

The air bomb is not very effective against dragons.

The seeking air mine is triggered when a flying unit comes close. It will attack dragons, healers and balloons. It deals great damage to them.

Minions are not attacked by the seeking air mine.