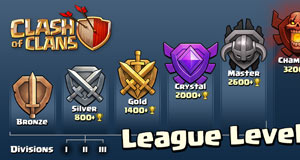 Trophy Leagues are groups where players are placed when they attack. You will be placed in the league that matches the amount of trophies that you currently have. Each trophy league level has it’s own award bonus if you win a match.

You will join a  league automatically when you attack another player, at the end of the first attack you will be placed in the appropriate league. You promote to a higher league if you met a certain trophy limit. You will demote to a lower level if you go under a certain limit.

When A League Season Ends