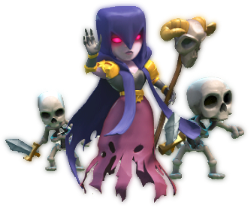 The witch is the final troop unlocked in the dark barracks, it is a powerful troop because she deploys skeletons on the battlefield. The witch doesn’t have much health, it is almost the same as the wizard. Be sure to assist her with a few Giants or other high hit point troops to distract the defenses.

The witch deploys skeletons, these also attack the enemy base. The witch will deploy new skeletons when they die. This way you can clear some bases with ease when strategically deployed.

Appearance Of The Witch

Offensive Strategy with the witch

Defensive Strategy with the witch

Fun facts about the witch

A video with witch attacks and a strategy guide how to use the witch the best.